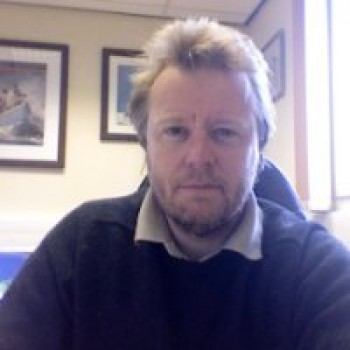 In state of the art Organic Light Emitting Diodes (OLEDs), 100% conversion efficiency of charge to light is possible. Because charge recombination produces 25% singlet excitons and 75% triplet excitons which are dark states, this requires a process that converts triplets into singlets. Currently achieved using Ir based phosphorescent emitters, but now a new process, Thermally Activated Delayed Fluorescence, TADF, which requires no heavy metal phosphors, has been shown to achieve the same result. Here I will describe how a purely organic fluorescent emitter can ‘harvest’ triplet excitons and convert them into light producing singlet states.

Detailed photophysical measurements of intramolecular charge transfer (ICT) states have been made both in solution and solid state. Temperature dependent emission and delayed emission are used to map the energy levels involved in molecule decay, and through detailed kinetic modelling of the thermally activated processes observed, true electron exchange energies and other energy barriers of the systems determined the effect of controlling molecular geometry on the photophysics will be shown.

For specific donor acceptor molecular configurations, the CT singlet and triplet states are found to be the lowest lying excited states of the molecule with very small electron exchange energies ? kT. In these cases the decay kinetics of the molecules become significantly different to normal molecules, and the effect of rapid recycling between CT singlet and triplet states is seen to greatly extend the lifetime of the ‘excited state’. By controlling molecular geometry in the solid state we show that the photophysics of a TADF system is different to that in a device, such that the device becomes far more efficient, with devices having > 19% EQE.