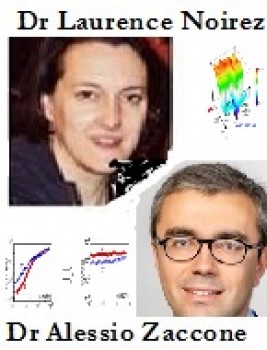 On the basis of a Maxwell gas model (1867), it has long been suspected that liquids and polymer melts exhibit (shear) elasticity at high solicitation frequencies (MHz or GHz) only. Recent experimental improvements seem to indicate that liquids exhibit also shear elasticity at very low frequency (0.1 to 10Hz); i.e. a nearly “static” shear elasticity. At the Laboratoire Léon Brillouin, we have developed an experimental protocol to make possible to access this “static” elasticity [1]. The static shear elasticity is identified at sub-millimeter scale, both on simple liquids and complex fluids (entangled and unentangled polymer melts, molecular glass formers, Van der Waals liquids, ionic liquids, H-bond liquids including liquid water) pointing out a probable generic character. This property means that liquids are not viscous but possess a weak but finite elastic threshold below which they exhibit a solid-like behavior.

It will be shown on some examples how the elastic response and the usual viscous or viscoelastic behaviors are related. Low frequency shear elasticity has profound implications on flow, surface instabilities, thermodynamics, fluidic transport mechanisms and make possible the identification of new liquid properties as cooling under flow or spectacular optical conversions in strain-driven optical harmonic oscillators [2]. From a theoretical point of view, static shear elasticity challenges molecular approaches like the viscoelasticity theory, while cooling challenges the viscous friction heating. Shear elasticity opens the route to alternative models [4] predicting a non-zero shear length-scale dependence [3] and revisiting the Frenkel zero-frequency shear elasticity assumption and introducing solid-like gap-based approach [5].


Following a short interlude we will then have our second speaker at 18:30

Perfect crystals have elastic constants that, at low temperatures, can be determined from the lattice structure using a harmonic energy expansion in the interatomic displacements with the affine deformation approximation (every atom is displaced according to the imposed macroscopic strain tensor). This exercise was done long ago and is known as the Born-Huang theory of atomic elasticity of crystals. Corrections due to thermal fluctuations were subsequently implemented by Hoover and collaborators. For amorphous solids the situation is very different, because the affine approximation breaks down [1-3]. The reason is that in the affine position (obtained by acting with the strain tensor on the position vector of any lattice point) the mechanical force balance is enforced by virtue of centrosymmetry in a perfect crystal lattice, but in amorphous lattices there is no such inversion symmetry – as a consequence, the net vector sum of all forces that an atom receives from nearest-neighbours is not zero. in amorphous solids. This force has to be released on all atoms, for the solid to deform in mechanical equilibrium at zero rate (or zero-frequency), which leads to an extra displacement known as the nonaffine displacement [3,4]. This (substantial) correction to Born-Huang theory has been implemented in recent years and leads to successful predictions of elasticity and viscoelasticity of various amorphous materials (e.g. random packings [3], polymer glasses [4], metallic glasses [5] etc). The theory gives the nonaffine correction as a negative correction to the elastic and viscoelastic moduli (softening) and recovers various limits of isostatic and Maxwell rigidity scalings for simple central-force interactions, such as the shear modulus at jamming [3], G~(z-2d), seen in many simulations [6]. This negative correction can be written as an integral over the eigenfrequency spectrum of the system which involves the vibrational density of states (DOS). After reviewing these advances, I will explore how combining this theory with the recent concept of phonon gap in liquids [7] may open up the way for a new description and understanding of confinement-dependent low-frequency shear elasticity that has been reported experimentally for a number of liquids and polymers [8,9].