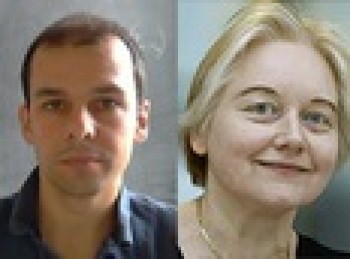 This talk addresses quantum dynamical studies of ultrafast photo-induced energy and charge transfer in functional organic materials, complementing time-resolved spectroscopic observations [1] which underscore that the elementary transfer events in these molecular aggregate systems can be guided by quantum coherence, despite the presence of static and dynamic disorder. The intricate interplay of electronic delocalization, coherent vibronic dynamics, and trapping phenomena requires a quantum dynamical treatment that goes beyond conventional mixed quantum-classical simulations. Our approach combines first-principles parametrized Hamiltonians [2], based on TDDFT and/or high-level electronic structure calculations, with accurate quantum dynamics simulations using the Multi-Configuration Time-Dependent Hartree (MCTDH) method [3] and its multi-layer (ML-MCTDH) variant [4], along with semiclassical methods [5]. The talk will specifically focus on (i) exciton dissociation and free carrier generation in regioregular donor-acceptor assemblies [2,6], and (ii) the elementary mechanism of exciton migration and creation of charge-transfer excitons in polythiophene and poly-(p-phenylene vinylene) type materials [5,7]. Special emphasis is placed on the influence of structural (dis)order and molecular packing, which can act as a determining factor in transfer efficiencies. Against this background, we will comment on the role of temporal and spatial coherence along with a consistent description of the transition to a classical-statistical regime.

Biography
Irene Burghardt received her PhD in chemistry in 1992 from the University of Lausanne, Switzerland. She conducted her postdoctoral research at the Center for Nonlinear Phenomena and Complex Systems, Brussels, Belgium, in 1992-1995, followed by research fellowships at the Universities of Bonn and Heidelberg in 1996-1998. From 1999 to 2011, she held a Centre National de la Recherche (CNRS) research position at Ecole Normale Superieure, Paris, and was appointed CNRS research director in 2007. In 2011, she moved to Goethe University, Frankfurt, German, where she holds a full professorship in theoretical chemistry. Her research address quantum molecular dynamics and nonequilibrium phenomena, with a focus on materials and biological systems.

First devised in the 50's, Many-Body Perturbation Theory proposes to capture the electronic correlation by performing mathematical expansions. Along with the years, physicists, mostly focused on infinite solids, and chemists, mostly interested in molecules, have developed different approximations or, in other words, have selected different Feynman diagrams.

During the last 5 years, with the advent of dedicated computer codes, physicists have started to investigate quantitatively the performance of the physicists’ GW approximation [1] for molecular systems. And the results are unexpectedly good!

With the open source software MOLGW [2], we have assessed the accuracy of the GW approximation to the self-energy for the evaluation of quasiparticle energies (ionization potentials) [3]. We also have investigated the performance of the Bethe-Salpeter for the evaluation of neutral excitations (optical spectra) [4], which is a competitor to traditional time-dependent density-functional theory.

We will also report very recent findings about the most adequate Feynman diagrams to go beyond the GW approximation [5].

Biography
Fabien Bruneval obtained his PhD in 2005 from Ecole Polytechnique (France) under the supervision of Dr. Lucia Reining. He had been working for two years as a postdoctoral fellow in the group of Prof. Michele Parrinello in Switzerland. He has been working as a staff researcher at CEA (French Atomic Energy Council) in Saclay (Paris area) since then. Recently, he spent a year as a visiting scholar in the group of Prof. Jeffrey Neaton at UC Berkeley.

Fabien Bruneval is mostly active in the field of the ab initio calculations of electronic excitations in solids and molecules. He participated to the development of the GW code in ABINIT suite. He is the main developer of the code MOLGW.