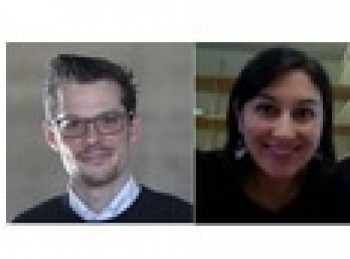 Fluid-like genome organization through multiscale molecular modelling - Dr Rosana Collepardo
The three-dimensional organisation of the DNA is one of the great marvels of physical biology. By winding around a special class of proteins, the metre-long DNA manages to compress enormously to fit inside tiny (6 ?m) nuclei, avoid entanglement and, moreover, maintain exquisite control over the accessibility of the information it carries. The structure of this remarkable complex of DNA and proteins, known as chromatin, determines how easily the DNA can be accessed and, thus, it is intimately linked to gene expression regulation. In this talk, I will explain how the structure of chromatin is much more fluid and tuneable than originally proposed, which explains how chromatin achieves various different roles in vivo according to the transcriptional state, cell-cycle stage, or in response to environmental signals (Collepardo and Schlick, PNAS 2014). I will also discuss how multiscale modelling can be used to reveal the molecular mechanisms behind epigenetic control of chromatin structure and provide a link between epigenomes, structure, and gene function (Collepardo et al., JACS, 2015). Finally, I will talk about the “new phase” of genome organization: a new paradigm that suggests how liquid-liquid phase separation of genomic mixtures might help organize genomic information into distinct membrane-less compartments inside the Cell nucleus.

Short bio: Rosana Collepardo is a junior group leader (Winton Advanced Research Fellow) at the Department of Physics, University of Cambridge. Her work focuses on developing theoretical and computational methods to elucidate the physical mechanisms that determine packaging of DNA inside cells. She did her DPhil with David Manolopoulos at the PTCL in Oxford, and trained as a postdoc with Daan Frenkel and David Wales at the University of Cambridge, Modesto Orozco at the Barcelona Supercomputing Centre, and Tamar Schlick at New York University. Her group has recently been awarded an ERC starting grant to investigate genome organization with sub-nucleosome resolution.