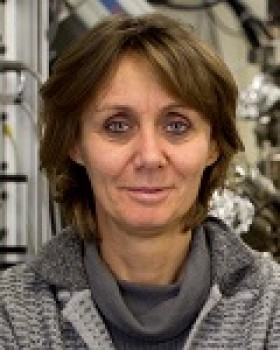 Roberta Sessoli obtained the PhD in Chemistry in 1992 at the University of Florence working on low dimensional molecular magnetic materials with Prof. Dante Gatteschi and performing part of her studies at the Institut d'Electronique Fondamentale - Université Paris-Sud with Dr. Jean-Pierre Renard. She developed her career at the University of Florence, as an associate professor since 2000 and full professor since 2012. As an experimentalist and a pioneer in the field of Single Molecule Magnets she has collaborated with many chemists and physicists to develop novel materials and novel investigation methodologies. She has been invited professor at Pierre & Marie Curie University, Paris (2001), at the Otago University, New Zealand (2017), and she has been awarded with a visiting professorship at the Gutenberg University in Mainz (2018-2019). She is a member of the Academia Europæa, of the Accademia Nazionale dei Lincei, and a fellow of the Royal Chemical Society. She is author of about 350 peer reviewed articles, one book, and several book chapters. For her scientific achievements she has been selected as a member of the Science and Technology Advisory Council of the President of the European Commission (2013-2014) and she received prestigious prizes such as the Distinguished Woman in Chemistry award from IUPAC (2015), the Lecoq de Boisbaudran award from the European Rare Earths Society (2015), and the Agilent Technologies Europhysics prize (2002). In 2010 she has been awarded with an ERC Advanced Grant to investigate magnetic molecules deposited on conducting surfaces.