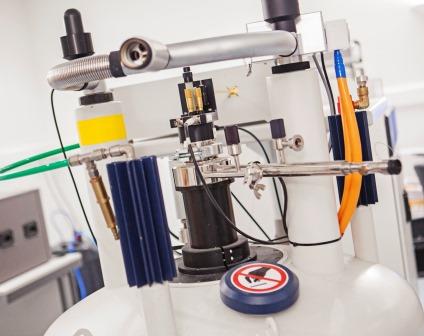 The term "local structure" refers to the structure of a material over a lenth scale of a few interatomic distances (the length scale of nanoscience), where large fluctuations in structure might cause the local structure to appear significantly different from the average atomic structure revealed by traditional x-ray or neutron diffraction methods. Local structure is particularly interesting in disordered materials, ranging from highly disordered materials such as glasses and fluids to crystalline materials containing disorder of the positions of atoms, of the orientations of molecules and molecular groups, and of the orientations of magnetic moments.

The MRI has a number of techniques to study the structure and dynamics of local structure:

Total scattering of x-rays and neutrons

The term "total scattering" refers to a diffraction technique in which the entire diffraction pattern – Bragg peaks and all the scattering between the Bragg peaks – is measured to high accuracy taking account of all non-sample contributions to the background. The Fourier transform of the total scattering gives a histogram of all interatomic distances, encapsulated in a function called the Pair Distribution Function (PDF). The PDF provides direct information about the local structure, and is used as the basis for modelling of the structure using a technique called the "Reverse Monte Carlo" method.

In order to obtained the best resolution in the model, it is necessary to maximise the value of the scattering angle coupled with using as small a wavelength of the radiation (x-ray or neutron) as possible. We use specialised instruments at the UK's ISIS neutron facility, and we have our own x-ray diffractometer that is optimised for this work (using a silver x-ray source). We are also part of the team building a new PDF instrument at the UK's Diamond synchrotron.

We are also lead authors of the RMCprofile code for structure modelling using total scattering.

X-ray absorption spectroscopy (XAS) is another way to measure the PDF of a material. The wavelength of an x-ray beam at a synchrotron facility can be tuned to be very close to that of the absorption energy of one of the atoms in the material. The absorption spectrum (the profile of absorption as a detailed function of energy or wavelength) depends sensitively on the local atomic coordination around the absorbing energy. The Fourier transform of this profile is very close to the PDF. This XAS PDF has one disadvantage and one advantage over the diffraction determination of the PDF. The disadvantage is that the PDF that is measured is only for a restricted range of interatomic distances, mostly the first two or three shells of neighbouring atoms, whereas the diffraction PDF will extend to significant distances (some tens of nanometres). The advantage over the diffraction PDF is that the PDF is element-specific, namely you obtain the local structure around the specific atom that the wavelength has been tuned for. Thus in an material such as ZrW2O8 you can obtain a separate PDF for both the Zr and W atoms. The diffraction PDF is a combination of all the element-specific PDFs, and thus can be harder to unravel. The ideal experiment will be a combination of both neutron and x-ray diffraction PDF measurements and an XAFS PDF.

- Spin echoes: "violation" of the Second Law of Thermodynamics, recovery of lost magnetisation. Application to the measurement of T2 and diffusion.

The Electron Paramagnetic Resonance (EPR) facility at Queen Mary University of London offers EPR measurements and spectral interpretation to users within the United Kingdom and overseas. This service is equally intended for academic colleagues as well as industrial partners.

EPR spectroscopy exploits the physical properties of unpaired electrons to give information about the electronic structure of stable and transient radicals, transition metal complexes and optically excited triplet states. It is also used to address electron transfer kinetics and reaction mechanisms. EPR finds broad applicability in both basic and applied research.

The EPR facility is located in London a short distance from the City of London (Mile End Road, E1 London) and is easily accessible from all over the country.

If you are interested in doing EPR measurements please get in touch with Dr Enrico Salvadori.

Muon spin spectroscopy is an experimental technique based on the implantation of spin-polarized muons in matter and on the detection of the influence of the atomic, molecular or crystalline surroundings on their spin motion.