First results from our PDF diffractometer 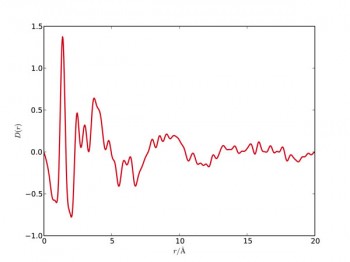 Whilst not our first measurement per se, we now have our first analysis from which we have produced our histogram of interatomic distances within a measured material.

The material is called orthoterphenyl. The molecule structure is shown in one of the photographs; essentially three rings of carbon and hydrogen atoms connected together, with formula C18H14. This material easily forms a glass, and we have an experiment to measure the structure of the glass scheduled at the ISIS neutron facility. Having complementary x-ray data will help enormously with analysis of the neutron total scattering data.

The peaks mostly arise from carbon atoms. The first three peaks are the nearest-neighbour (1.4 Å; the unit of distance of 1 Å is 0.1 nm or one 10th of a billionth of a metre), second-neighbour (2.45 Å) and third-neighbour (3.05 Å) carbon distances within single rings. For larger distances we see an overlap of several types of interatomic distances within the molecule rather than distinct peaks. For example, the peak at 3.74 Å that forms part of a multiple-peak group is the fourth-neighbour distance involving a carbon atoms in different rings. However, there are other distances between carbon atoms in different rings that could be at distances of around 2.7 Å that will be hidden around the second and third neighbour peaks, so unravelling this structure will require some analysis.

It is encouraging that this has worked so well.

Credit to the team who have made this work so far: my colleague Anthony Phillips and our great team of students Ed Beake, Dominic Carter, Helen Duncan, Juan Du and Serena Maugeri, together with support from Rory Wilson and Isaac Abrahams.