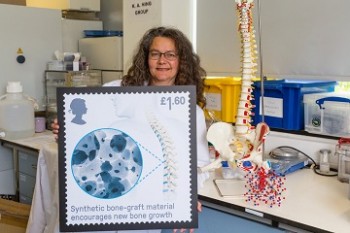 Dr Karin Hing's Synthetic bone graft Royal Mail stamp
The pioneering work of Materials Research Institute researcher Karin Hing has been celebrated with a stamp as part of a new series launched by the Royal Mail.

The six stamp set, launched today, marks innovations in British engineering from the last 50 years including the development of a synthetic bone graft by Dr Karin Hing from the School of Engineering and Materials Science.

Her team at Queen Mary engineered materials that encourage bone growth when used in complex orthopaedic surgeries and have improved the outcomes for hundreds of thousands of patients worldwide.

Dr Hing’s stamp depicts a close-up of the synthetic bone graft with an example of where bone grafts are commonly used to support bone regeneration in orthopaedic surgery.

Other innovations marked in the collection include the Raspberry Pi, the Falkirk Wheel, the three-way catalytic converter, superconducting magnets for use in MRI scanners and the tunnel boring project that will enable Crossrail.

Also celebrated with its own four stamp set is the Harrier Jump Jet, the first operational jet fighter in the world to use revolutionary vertical short take-off and landing technology.

A huge honour
Dr Hing said: “It was a delightful surprise and a huge honour for my work on synthetic bone grafts to be recognised with a stamp and in particular to be part of a set which celebrates some incredible innovations in British engineering. I feel very fortunate that my research has gone on to have such a positive impact on people’s lives, but this would not have been possible without multidisciplinary collaboration. Having our engineering of synthetic bone grafts celebrated on a stamp like the Marvel Comics and the Harry Potter books might even impress my kids.”

Dr Hing started investigating how the structure of bone grafts can affect their performance while she was working as a PhD student at Queen Mary.

When bones fracture, they are often able to heal themselves. But sometimes the fracture is too large or complex for the body to repair on its own, so bone grafts are used in surgery to promote bone healing.

These grafts can be either taken from the patient’s own body (auto-graft) or engineered (synthetic bone-graft substitute). Whereas an auto-graft introduces a natural template and new living bone cells into the area, a synthetic bone graft must bioactively encourage native bone and stem cells to form new bone tissue, which should eventually replace the synthetic scaffold material completely.


Developing substitutes
Dr Hing and the team at Queen Mary developed bone-graft substitutes able to enhance the body’s natural ability to rebuild bone tissue by looking at their structure and chemistry.

Having studied the sponge-like structure of cancellous bone, as a post-doctoral researcher Dr Hing developed a method to mimic it in a synthetic material with a similar chemistry to natural bone mineral. The pores needed to be the right size for new bone to grow into as well as interconnected, to allow for the exchange of nutrients via blood vessels to make and sustain healthy tissue.

The group also investigated the role of the grafts’ chemistry on bone regeneration, where the introduction of the correct level of silicate ions into the scaffold is believed to alter the surface chemistry so that the right proteins are recruited to direct cell attachment and bone formation.

This work resulted in the commercial launch of the bioactive synthetic bone grafts Actifuse™ and Inductigraft™, through the QMUL spinout company ApaTech™ Ltd that was acquired in 2010 by Baxter International.

Dr Hing was awarded the Royal Academy of Engineering’s Silver Medal in 2011 for her work.

What comes next?
She added: “The work that I am leading now is into understanding the mechanisms through which the structure and chemistry of these bone grafts materials can have such an impact on the biological response of the host with an eye to potential use of this knowledge for tailored medicine in the future.”

Royal Mail worked with the Royal Academy of Engineering on the stamp set.

Philip Parker, Royal Mail, said: “British innovation in engineering is world renowned. This stamp issue proudly celebrates the projects and inventions which showcase this, as well as demonstrating the extraordinary range of disciplines that British engineers excel in.”

The stamps and a range of collectible products are available from www.royalmail.com/britishengineering, by phone on 03457 641 641 and in 7,000 Post Offices throughout the UK.