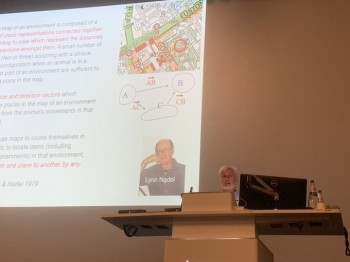 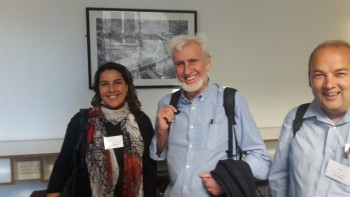 Professor John O'Keefe (centre) with co-chairs Professor Alan Drew and Dr Isabel M Palacios
Both the Institute of Bioengineering and Materials Research Institute were delighted by the turnout for the inaugural Biology Meets Physics Symposium at Queen Mary University of London. There was a great variety of talks that stretched from the birds to the bees - Peter Hore's analysis of migratory songbirds to Yannick Wurm's talk on pollinator health.

This multidisciplinary event was rounded off by our keynote talk The hippocampus as a cognitive map with Professor John O'Keefe sharing the latest developments in his work about the area in the brain known as the hippocampus. John was awarded the 2014 Nobel Prize in Physiology / Medicine for the discovery of cells that constitute a positioning system in the brain - an 'inner GPS' - that enables us to orient ourselves.

Biology Meets Physics: connected physicists, engineers and biologists and our sincere thanks to all the speakers and presenters. The organising committee meet later this month to start work on next year's event here at Queen Mary.