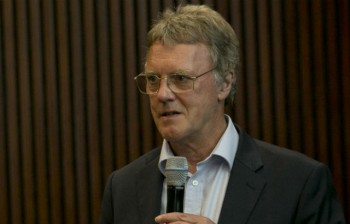 Sir Peter Ratcliffe
Sir Peter Ratcliffe, who qualified as a doctor in 1978 from one of Queen Mary’s founding institutions - St Bartholomew’s Hospital Medical School - has been jointly awarded the Nobel Prize in Physiology or Medicine for discoveries of how cells sense and adapt to oxygen availability.

Sir Peter began his studies at Cambridge University and then moved to St. Bartholomew’s Hospital Medical School to complete his studies in the 1970s.

This prestigious and world famous prize for 2019 is shared between Sir Peter, William Kaelin Jr and Gregg Semenza.

Oxygen is essential in helping us convert food into energy. This year’s three Nobel laureates have received their award for discovering how cells sense and adapt to changing oxygen availability and identifying molecular machinery that regulates the activity of genes in response to varying levels of oxygen. They established the basis for our understanding of how oxygen levels affect cellular metabolism and physiological function. Their discoveries have also paved the way for promising new strategies to fight anaemia, cancer and many other diseases.

Queen Mary’s Principal and President, Professor Colin Bailey, commented: “I am delighted that another Queen Mary alumnus has been awarded a Nobel Prize. It is clear that this work is seminal, and it will have ramifications within and beyond physiology and medical science. On behalf of the entire community here at Queen Mary I would like to pass on my congratulations for this remarkable achievement”.

Sir Peter joins eight other former staff and students of Queen Mary University of London and its former institutions to have been awarded a Nobel Prize.