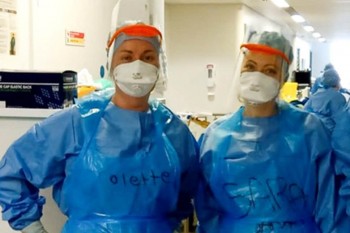 Dentists from Barts and The London School of Medicine and Dentistry, have used 3D printers to design a high-protection visor for NHS medics that is about to be produced in vast numbers for London’s Nightingale hospital.

Professor Shakeel Shahdad, from Barts and The London School of Medicine and Dentistry, said dentistry was a high risk for Covid-19. “We felt that the visors we had were not fit for purpose. We didn’t think they were big enough,” he told the Standard. “Initially we began to address the problem in our dental hospital.” He said the visors and “helmets” they created were soon being used by front-line medics at Royal London Hospital, part of Barts Health NHS Trust.

The dental school, part of Queen Mary University of London, secured a rapid £25,000 grant from Barts Charity last week to fund the designs, which medics made after taking 3D printers home. Their sixth prototype has passed infection control rules. The equipment can be disinfected and reused.

Dental school staff have been 3D-printing 70 to 100 visors a day “non-stop from home”. Production is now to be ramped up to provide 10,000 visors for the Nightingale field hospital at ExCeL. The design is being outsourced to the Batch.works factory in Bethnal Green, which can print 500 to 700 a day.

“Once the tooling is done we can probably produce half a million pieces from there,” Professor Shahdad said.

He added: “I’m overwhelmed and touched by the amount of goodwill. People want to help in whatever way they can, whether it’s financially or through technology. It’s been an incredible experience. We should have the ability to have 30,000 to 50,000 pieces in the next two to three weeks.”